—–The summer of 1975 was an epic summer. I had just graduated San Dieguito High School, followed by a road trip with my good friend and fellow classmate Kenny Taylor, in my ’61 Dodge Van, to Ashland Oregon. We spent two months living between Lithia Park, in the heart of Ashland, and a 20-acre garden commune where we went to escape the summer heat — spending most of our time swimming in the cool waters of the Applegate River.

The most epic event of all though, took place after our return home, at the end of summer – The Stone Steps Surfing Contest. If you grew up and lived in Encinitas during the ‘70’s, the Annual Stone Steps Surfing Contest was an event that you just didn’t want to miss. It was the Woodstock of Encinitas – Music – Beer — Big crowds— There was just nothing else like it.
If you hadn’t seen a local Encinitas friend or two for a while, you were guaranteed to run across them here, on this day. If you didn’t it was because they were either in the hospital, in jail or had died.

In the beginning, before there were any surfing contests outside of maybe Hawaii, the Encinitas Stonesteps Surfing Contest emerged. The rules were simple: Pay your entrance fee, and when the starting gun goes off signaling the beginning of your heat, but before you hit the water – you have to guzzle a resin bucket full of beer –then go surf. The winner of the heat goes on to drink more beer and surf more heats, until finally, from the last group standing – and that can still surf, a “winner” is selected.

I recently had a chance to spend time, and talk with one of the key organizers, and historian of this event, John Peugh. John grew up a few blocks from the Stonesteps, where he still lives today.

John – “The contest was started around ’67. It was started by Jim Jinks and Richard Dowdy. Most of the people that competed in it were just locals and people from Hansen’s Surf Shop — something they came up with and put on – Hansen’s and Surfboards Hawaii and just local guys that did all the work for them. After a couple years of small contests, it grew in favor with people – with the drinking of the beer before you go out with each heat, and by 1969, it was a pretty good size event. As it went on into the ‘70’s, it would get to be over 2000 people on the beach, and at times over 100 kegs of beer would be consumed in one day.”

John- “It would be Encinitas, Cardiff, Solana Beach and Del Mar. A lot of people just came – knowing what it was – but most of them were from Encinitas. The younger kids that were there, were basically locals.”
“We had an entry fee – like two dollars and fifty cents. For $2.50 you got a free breakfast at Kenos, a tee shirt and all your beer.”

Kyle – “How big were those buckets of beer?”

John – “I think those are quart resin mixing buckets – is what they used.”

John – “1975 was put on by Stretch Mark Beach Athletic Club, from the Lodge Bar and Café down in Cardiff. The MC’s were Ira Black and Clint Johnson. All of the trophies for this were donated by people that worked in the surf shops. A lot of them were made in the surf shops. Certain ones like the 1st place urinal trophy in 1975 —  that was a Clint Johnson production.” We both laugh. “He was a plumber I heard.”

Kyle – “Somebody did tell me the story of Tommy Lewis, who took first place that year — It took him two days to get that thing home – because it was so heavy — and all the partying along the way.”

“So how did the name Stretch Mark Beach evolve?

John – “Well, when the Lodge opened up in Cardiff, around 1970, OMBAC was in Ocean Beach. And we decided to form a club – Stretch Mark Beach Athletic Club. The Lodge was right down the beach in Cardiff – we had our own parking lot and place to gather, next to the Lodge.” “We competed against OMBAC in drinking contests and other events. We had everything from initiations to special tee shirts.”

Kyle – “How did they come up with that name – – Stretch Mark Beach?”

John – “Well,” John laughs, “It was just picked. They wanted something fairly clean, but different.  It was a kind on parody of the beach.”

Kyle – “I heard stories relating to the females being recent mothers at that time.”

John laughing, “No, that’s not it. Our girls didn’t get stretch marks.”

Kyle –  “How did you guys manage to get all that equipment, the stage and beer down to the beach?”

John –  “Putting on the contest was an extreme challenge,” John says with a serious face. “We never put up our posters to draw people until the night before, because it was illegal. We couldn’t bring anything in off Moonlight Beach, because it was State, and the State wouldn’t have anything to do with it. So everything had to be walked down the stairs – all 100 kegs of beer,” John groans. “The band stage had to be put down there – and taken back up – the speakers – everything it would take to put on the party. The only thing that we didn’t drag down there were the porta-potties, and that we usually did that at night after the State went home. We had a guard that was sympathetic to us and gave us a key to the gate.”

Kyle – “Did they ever make an effort to stop you?”

John – “Oh yea –- I myself got a ticket for coming out of there one night about midnight. We waited and waited after we had gotten in there to make sure there were no State people around. There were two of us in trucks coming out, and as soon as we hit the dry sand at Moonlight, about ten sets of headlights came on, and it looked like every State guard for 100 miles was there.”

“They basically came to the conclusion that all they could do was give us a ticket for driving on the beach – so we took our ticket and said goodbye. Then we went to court and the Judge suspended the ticket.”
“At that time you weren’t basically required to have any type of permits or anything.”

“For many years it went off without a hitch. We never got stopped in the middle of one. We never had a problem with the police – they just stayed away — there’s just too many people and not enough police. Back then you only had a couple of Sheriffs in the whole area – so they were say outnumbered in trying to do anything.”

John – “The beer was a challenge. The beer company could not deliver the beer to the beach. Somewhere  around 1975 we were getting the beer from Olympia company.
“They would bring the beer truck and park it in my driveway and we would start to shuttle the beer – we took a whole bunch down that night. A lot of people carried down everything that we ordered. But if we ran out, and we needed more beer, then we would come to my house with a pickup truck, pick up the kegs from the beer truck and take them back down the stairs.”

Kyle – “Were you able to cover your expenses from the fees – or did you ever have to dig into your own pockets?”

John – “I don’t think we ever had to dig into our own pockets. The beer was always donated. Olympia would donate several kegs – Donald Takayama was always big at donating kegs. We would get support from lots of different businesses – individuals would donate kegs.”

Kyle –  “Do you have any particularly fond memories of any events or incidences through the years?”

John – “They used to announce on the posters that there would be dancing girls and sky divers. Don Hansen – he used to skydive – and a bunch of his friends – bailed out of a plane at Stonesteps and came floating down on the beach – three or four of them.”

“We always had a Queen – Miss Stonesteps – and usually picked her out by going to a topless bar in San Diego, a couple of nights before – We all ventured down there as a group to select a Queen and find one that was willing to come down and do it.”

Kyle – “So it was a democratic process?”

John – “Well it was mostly just finding one that was willing to come down and do it.” John laughs.

Kyle – “Are there records of the winners of the contest throughout the years?”

John – “Takayyama won it several years. He was a shoe-in because he donated so much beer. I believe Tommy Lewis won it in 1979, and I think Mike Doyle may have won it once.”
“Most people really though – by the time you went through 50 or 60 kegs of beer –really weren’t that concerned about the surf contest any more,” says John as we both laugh.

Kyle – “My question always was, if you were doing well that day –- you’re going through several heats and several of those resin buckets full of beer so…”

John – There was a lot of surfers throwing up out in the water as they got further along. You drink it down really fast – your putting it down in seconds. You’re just dumping it down and going back out. You come back – you’re waiting another hour or two for your next heat – your sitting around out there in the hot sun – so what are you doing? You’re drinking more beer!”
“I mean, there were some people that just failed to make it back out in the water.” John says as we both laugh.

Kyle –  “So this was as much a drinking contest as it was a surfing contest.”

1975 Stone Steps Surfing Contestant About to Collapse… Too Much Beer!

John – “Well, that was the thing –- it kind of evened the playing field between a good surfer and a bad surfer.”
John summed up the event like this:

“This thing was started, purely to have fun. It wasn’t about who won, or if it was, you wouldn’t be drinking all that beer before you went out into the water.”
The last of the big contests was held in 1979.

Since then, the spirit of the contest has continued as a smaller yearly surfing contest, without the beer guzzling.
There is though, a great neighborhood party held later that evening, to announce the various winners of the contest, who receive beautiful trophies hand crafted by John Peugh. Then there’s the raffle to win various prizes, and the grand prize being, a Slingerland surfboard.

There’s still plenty of beer, a tequila bar, locally produced wine from Leucadia, fresh caught fish on the barbeque and all the accouterments for baja tacos, along with endless potluck dishes carried in by all the local neighbors, and of course, live music.

Keeping with tradition, the event is not announced or publicized. 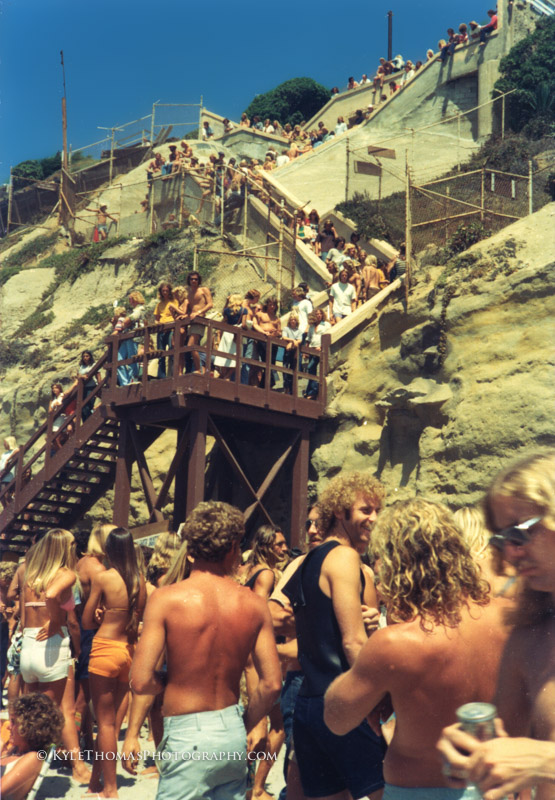